The busy month of September rolled right into another eventful month for October! This month brought with it more on the Royal Commission with the release of the Terms of Reference, announcement of the Commissioners and a great deal of conversation around what Providers need to prepare for. Staffing ratios and the Aged Care workforce were another hot topic, with the Royal Commission and the industry review on workers highlighting both. The first Aged Care Quality and Safety Commissioner was appointed, and lack of funding was again highlighted as a continuing issue. We also celebrated National Carers week, new innovations and support systems and the roll out of additional funding to support regional & remote areas and Home Care places. Let’s dive into what happened in October!

October saw the Terms of Reference for the Royal Commission released, as well as the appointment of the Royal Commissioners; The Honourable Justice Joseph McGrath and Lynelle Briggs AO. Prime Minister Scott Morrison has stated that the Terms of Reference were the result of more than 5,000 submissions, four national roundtables and consultations with medical and Aged Care professions. The final report is due by 30 April 2020.

Since the announcement of the Terms of Reference, the industry is preparing for the Royal Commission and what it will mean. PM Scott Morrison has said that the commission will be ‘future-focused’; learning from past mistakes and establishing a national culture of respect for older Australians. Peak body Aged & Community Services Australia (ACSA) have welcomed the commission and also hope that a culture of respect is built, as well as being pleased that the Terms of Reference respects the need to look into all aspects of Aged Care. Leading Age Services Australia (LASA) has also expressed that the Terms of Reference are driving for an outcome of a sustainable Aged Care system that at its heart will deliver ‘accessible, affordable, quality care and services for all older Australians’.

At the recent LASA National Congress, held on the 28-30th October in Adelaide, delegates were advised to set up ‘war rooms’ by Peter Weldon (First State Super’s program director for the ongoing banking royal commission) in preparation for the Royal Commission.

For detailed breakdown of the Terms of Reference and resources and tools to help with navigating the Royal Commission, you can read information provided by Russell Kennedy Lawyers here.

Staffing ratios once again have been a much talked about topic this past month. The Australian Medical Association (AMA) has called for the Royal Commission to consider Registered Nurse-to-Resident ratios; and the Standing Committee on Health, Aged Care and Sport inquiry into the Aged Care Amendment (Staffing Ratio Disclosure) bill 2018 has shown that publishing staffing ratios with ‘data and context’ is required. The bill, introduced by the South Australian member for Mayo Rebekha Sharkie, calls for the quarterly publication of staff-to-resident ratios, and more transparency on qualifications. In late October, a Roundtable Public Hearing to discuss Staffing Ratio Bill took place, with Providers, peak bodies, government agencies and nursing and medical associations attending with the purpose of sharing a wide range of perspectives, discussing issues and considering if the bill should be passed. A recent parliamentary inquiry into the quality of Residential Aged Care Services has also called for legislation that would require facilities to have a minimum of one Registered Nurse on site at all times.

Ms Anderson is a former first assistant secretary in the Commonwealth Department of Health, and has wide-ranging experience in the health sector, including leadership roles in the health departments. Assisting Ms Anderson with the establishment of the commission is the interim Chief Clinical Advisor, Michael Murray.

Along with the appointment of the new Aged Care Quality Commissioner in October, there was also the recommencement of the Inquiry into Aged Care Quality Assessment and Accreditation. You can read the report on the Government’s website here and ACSA’s run down of the most recent occurrences here.

The My Aged Care portal has been a source of confusion and attracted much criticism, labelled as being difficult to understand or find services and accommodation with ease. The government announced in the 2018 budget $7.4 million for a new system navigator that would be more user friendly. A series of trials are being launched and tenders were invited in October. With trials commencing in January 2019 and following through until June 2020, a new navigating tool will need to be suitable for people with complex needs, support older Australians and their families and help them to understand their choices and access to services.

A new report released by the Australian Bureau of Statistics (ABS) has identified dementia as the second leading cause of death in Australia. Rising at an alarming rate, deaths from dementia have risen 68% over the past decade, and is the leading cause of deaths for women. Interestingly, a study released in August this year has identified that many Australians are ignorant about dementia, its prevention, causes and possible treatments. A major concern was the lack of understanding of preventative measures, and the idea that dementia was a ‘normal part of ageing’.

Funding has been allocated by the government for dementia prevention and research, with up to $15 million for Implementing Dementia Risk Reduction and Prevention Research Priority projects. You can view the open calls for Boosting Dementia Research Grants here.

And new in innovation for people living with dementia is a program called CarFreeMe, developed by the University of Queensland. Designed to support people who are no longer able to drive through the effects of the loss of flexibility and independence that it may cause, the program is being trialled in Canberra and Southern New South Wales regions. It connects with those living with dementia as well as their families, educating them on ways to stay active in the community and avoid isolation, even without the use of a car. You can view more on the program here.

A study that involved 1,701 participants has concluded that many Australians do not trust the Aged Care sector and only 30% of the general public believed it provides quality services. The findings were presented at the LASA National Congress that was held in Adelaide in October, and investigated how the general public saw the sector in regards to government funding, trust and transparency, innovation and quality of care. The study was conducted by agency Faster Horses Consulting, whose Managing Director, Veronica Mayne, noted that there was the need of a shift in the perception of Aged Care.

EveryAGE Counts has officially launched in October, aimed at fighting ageism and improving ‘economic, social, health and civic participation outcomes for older people’ living in Australia. The campaign, created by the Benevolent Society and working with a further 14 organisations and 8 individuals, can be viewed here.

In addition to EveryAGE Counts came the opening of Global Centre for Modern Ageing in South Australia. The centre was launched by the South Australian Premier Steven Marshall in order for people, businesses, researchers and Governments to collaborate and identify opportunities for innovation in services and products for older Australians to live well. Modern Ageing is about residents living healthy and purposeful lives and the new centre is an exciting step forward.

45% OF FACILITIES MAKING A LOSS

The trend of facilities declining in profitability is continuing, with another StewartBrown report reporting that now 45.1% of Providers are operating at a loss. This continues on from the previous reports in December 2017, where 41% of Providers were reporting a loss, and March 2018, when it had risen to 43%. Once again, the issue of funding for the Aged Care sector has been brought into question as the figures presented in the StewartBrown report continue to rise. In October the ABC Fact Check team (a team of academics and journalists who determine the accuracy of claims politicians and those engaged in public debate make) have analysed government funding to determine if funding itself has been cut to the industry. This investigation was a response to Opposition Leader Bill Shorten’s statement that the Morrison Government has cut $1.2 billion of Aged Care funding. ABC Fact Check concluded “that an adjustment to future spending does not represent a “cut” when the overall level of spending continues to rise”. In response, Sean Rooney, CEO of LASA, has expressed that despite the findings of the fact check, it does not account for the funding shortfall that the sector faces with rising costs, higher care needs and increasing number of older Australians.

900 Aged Care places have been added for First Australians to have access to Residential and Home Care places to allow for access to services closer to home. The first round of funding will be up to $26 million and will be for care places delivered in remote and very remote areas. Announced by Minister for Senior Citizens and Aged Care Ken Wyatt, the expansion of funding will increase the number of places delivered under the National Aboriginal and Torres Strait Islander Flexible Aged Care (NATS IFAC) program. The program expansion was announced in the 2018-19 budget.

An exciting initiative for regional and remote areas is the roll out of Verily Connect, the Virtual Dementia Friendly Rural Communities project. Aimed at supporting carers of people with dementia living in regional areas, the network connects people though a smartphone app, website and videoconferencing. In addition, volunteers trained in the Verily Connect system will be provided to give personal assistance. You can read further on the system here.

The Commonwealth Home Support Program (CHSP) will be assisted with an additional $100 million over two years, and is a welcome addition to help tackle the large waiting list for Home Care. Although welcomed by the peak bodies such as ACSA, there is still concern over the projected need of 140,000 Home Care places by 2021/2022, which is an extra 66,000 packages. You can read ACSA’s response to the announcement here.

The ‘Better Access to Care – Simpler Forms’ taskforce held its second meeting in October. Established to assist consumers by simplifying forms and therefore reducing stress in what is already a difficult time of moving into care, the taskforce are creating a simpler form for means testing. The forms currently in use are the Aged Care Fees Income Assessment (SA456) and Permanent Residential Aged Care – Request for a Combined Assets and Income Assessment (SA457). ACSA attended the taskforce meeting in October and you can find their breakdown here.

National Carers week was held in October in Australia, recognising and celebrating unpaid carers around Australia and the contribution they make to communities. This year’s theme was ‘Why we care’; and you can read some of the beautiful stories shared on the Carers Week website here.

October saw the 2018 LASA National Congress held in Adelaide, with around 1,200 attendees joining to explore the current hot topics like the Royal Commission, innovation and the workforce. Provider Assist were honoured to be a part of the congress and we thoroughly enjoyed the interaction many delegates had with our booth and the thoughts and opinions placed on our impact wall! 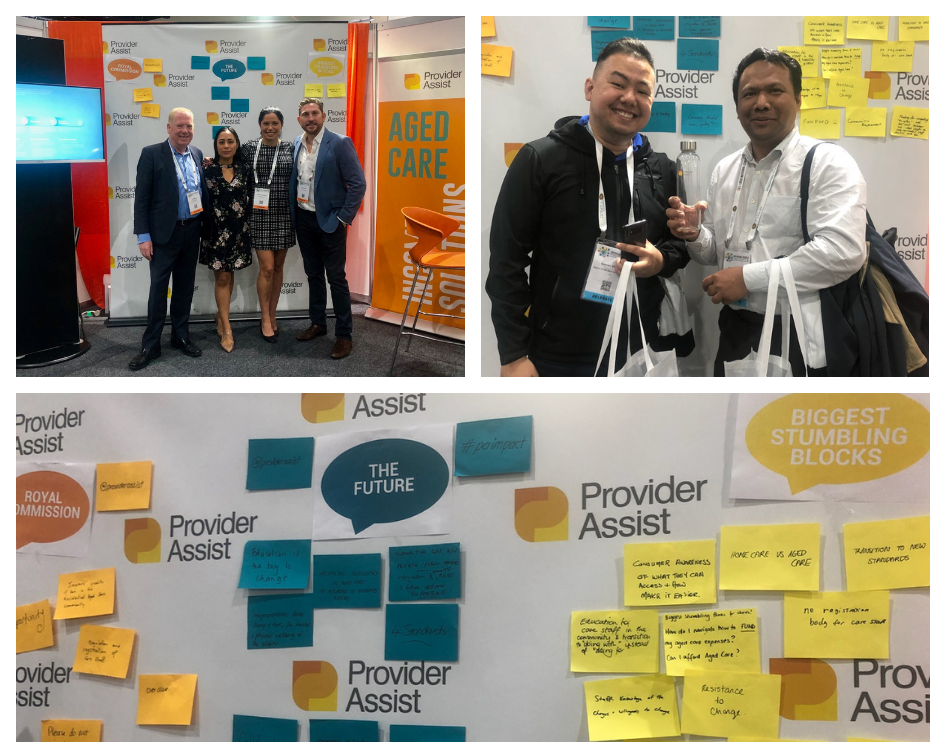 Beautiful stories have come out Bolton Clarke’s Centenarian Club, with five Melbourne Centenarians joining in a celebration along with the Victorian Seniors festival. With over 500 years of stories to share, you can read and hear the centenarians talk about their lives here!

That’s all for this month but check back in with us next month for another industry update!